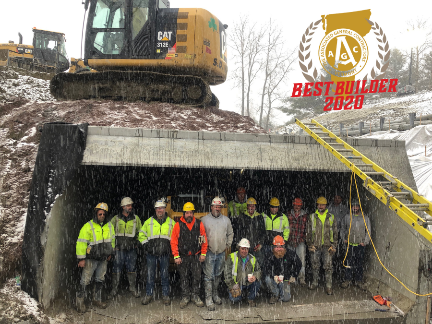 SD Ireland Brothers is the proud recipient of the AGC Best Builder Award for Highway Renovation and Rehab for the I-89 Emergency Culvert Replacement and Pipe Relining Project in Georgia, VT. The projects began on 11/4/19 and were completed on 5/15/20.

After the Halloween rainstorm of 2019 VTRANS contacted SD Ireland to immediately close down the exit ramp and begin 24-hour construction to replace the existing pipe with an 8’x20’ x 144’ box culvert. SDI provided the design and shop drawings of this structure within a few days and VTRANS quickly approved.

SD Ireland Precast Division immediately began constructing the box culvert at their shop and worked 24 hours a day to complete the fabrication of this structure. SD Ireland excavated 12,000 CY of soil to get to the subbase of the new box culvert. The invert of the new structure was 32” below the existing roadway.

The precast structure was installed with a 275 ton crawler crane.

Backfill of the structure proceeded and was performed around the clock 24 hours a day.

Guardrails were replaced, the ramp was paved and traffic resumed travel on the exit ram on 12/23/19.

The storm of 2019 eroded soil from around the down-stream structure and another sinkhole appeared on 2/2/20 near the I-89 NB travel lane shoulder.

This 11’ vertical ellipse pipe was 580’ long and crossed under I-89 Northbound and Southbound lanes as well as Skunk Hill Road.

In mid-February, installation of crossovers to direct Northbound traffic into the Southbound passing lane were constructed to get traffic away from the sinkhole growing under the Northbound lane. Asphalt for the crossovers was procured from Massachusetts because asphalt plants were closed in Vermont.

A concrete mud mat was installed in the corroded bottom of the existing culvert to seal off ground water from infiltration.

A 108” diameter x 620’ polymer coated pipe was pushed into the culvert one section at a time by a skid steer and banded.

A grout pump was utilized to fill the annular void between the pipes which exceeded 500 cubic yards of grout.

A cast in place concrete head wall and cradle wall were installed.